Who should do the honours for… Belgium?

Belgium just recently crowned their ‘Idool’ 2011 winner. A talented young man by the name of Kevin Kayirangwa, or simply Kevin and I think he would be a great choice to represent Belgium at the 2012 Eurovision Song Contest. He has a very fresh, contemporary vibe that seems to do well at the Eurovision these days and would be a worthy successor to Tom Dice (I’m ignoring the fact that Witloof Bay ever happened). Check out his new single She’s Got Moves below:

He reminds me quite a bit of Bruno Mars. Indeed, She’s Got Moves certainly does swing in that direction, with a bit of a Europop flavour making it one of my current favourite songs at the moment. He also did a very creditable performance of Cee Lo’s Forget You, along with OneRepublic’s Apologize and Usher’s More, all of which suggest he’s very much in tune with the current musical landscape. As such, should he go forward as Belgium’s representative, he’d a song in that style and level. Just imagine Belgium rocking out Baku with this:

Who should do the honours for… Poland?

Poland is one of those countries that seems to fly under the radar every Eurovision season and rarely makes a splash. With decidedly mixed results at the Contest, I think that what they need is a modern song that could become a mainstay on radio playlists across Europe and beyond. To that end, I think that this song should be in the running to represent Poland:

The song is called Flashing Lights and is sung by Paula Marciniak, who is a young Polish singer, model & actress and goes by the stage name Paula. I’m currently loving this song because its definitely modern, channeling in the Eurodance cool of Edward Maya’s global smash hit Stereo Love. And why not? Edward Maya is of notable Eurovision alumni, having got his first big break composing Romania’s 2006 Eurovision entry.

Rumor has it that this song has already been sent in for consideration for ‘Krajowe Eliminacje’, the country’s Eurovision Song Contest national selection. I really hope this is true. Flashing Lights is cool, catchy and a surefire club hit. It also lends itself to spectacular stage presentation and performance. And most importantly, it could be the song to let Poland set the stage on fire, rather than dousing it.

Who should do the honours for… the United Kingdom?

The UK is home to some of the world’s most prolific and talented singers and songwriters. Even though a majority regard Eurovision with a bit of derision, there are still plenty of new up-and-coming acts that might seriously consider it, and do well in the contest as well.

A worthy representative for the United Kingdom.

Having recently been eliminated from the X Factor, Aiden was the standout singer for me. His unique and intense performances were on par with established singers. Louis Walsh called him ‘the perfect popstar’ but I would call him a natural-born artiste. He has that credibility as a proper singer as opposed to a popstar. In my mind, popstars serve as icons rather than musicians. It was not surprising for me that he was eliminated so early in the game as he was not ‘mainstream’ or ‘poppy’ enough. Of course, what can you expect when you have acts like One Direction doing well? In anycase, Aiden turns in dark, dramatic performances that will definitely leave an impact with viewers. And given the right song, he could work wonders. If the rumors are true, MIKA could write an amazing song for the singer and the UK would be unstoppable.

Here’s my favourite performance of his on the X Factor, ‘Mad World’.

Who should do the honours for… Denmark?

After this year’s extremely successful placing, Denmark would undoubtedly want to build on that and send yet another great act and song that will secure another Top 5 position, maybe even victory.

In my mind, there are two acts that can deliver. One of these is a band that goes by the name of Alien Beat Club.

No novices to television, you might recognize Alien Beat Club, or ‘ABC’,  as the runner-ups of the Danish X Factor in 2009. They were the favourites to win, consistently turning in  great performances every week. I particularly liked their rendition of Lady GaGa’s ‘Just Dance’ with a rather surprising intro.

In terms of Eurovision, I reckon they’ll be a great choice because all four of them are talented singers and their sound is a cool urban pop with a dash of Euro flavour that should go down well with the voters and juries alike. Keep in mind that contemporary songs now tend to do quite well in Eurovision, as opposed to decades gone by. Check out their song ‘Echo’ from the album ‘Diversity’. It’s exactly three minutes long and would have made a perfect Eurovision entry:

Who knows? Victory at the Eurovision Song Contest might be as simple as ‘ABC’ for Denmark next year.

Who should do the honours for… Sweden?

So here is another little segment that I’d like to start up. Here, I’ll be talking about artists and producers that I’d like to see on the Eurovision stage. Not just random or personal selections you see, but representatives that I think could genuinely give their country a decent shot at winning the whole shebang.

Today, I’ll be talking about Sweden! The deadline for song submission has passed and SVT has reported a record number of submissions, 3,852  in total. Well, as long as THIS artist is in there somewhere, I’ll be happy. 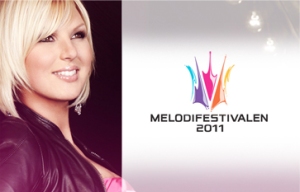 Sanna Nielsen, whom I’d love to see do the honours for Sweden, but only with the right song.

Being Sweden’s very own Celine Dion, Sanna should be given either a big, dramatic power ballad of Dion-esque proportions, or go the other route and do something hard-hitting that’ll showoff her amazing voice. I’m thinking along the lines of ‘Battlefield’ by Jordin Sparks. A song that’s cool, edgy, a little urban with a key change to end all key changes. A good old-fashioned schlager anthem would not be unwelcome, but with that, Sweden won’t do any better than a Top 10 placing. Which isn’t bad per se, but given the right song, Sanna could give Sweden its fifth victory and it would be a shame to waste a talented singer with that kind of winning potential.

Check out the incredible Ms. Nielsen’s last foray into Melodifestivalen (Sweden’s Eurovision preselection) where she placed second. So close.