Melodifestivalen 2012: The stage has been set.

With Melodifestivalen over for another year, its nice to still get updates and ‘backtrack’ through the past edition so that we don’t make like Peter Jöback and life doesn’t feel so Hollow. I recently found this time lapse video by Gustav Nyberg depicting how the stage of the Melodifestivalen 2012 was constructed. Check it out, its pretty awesome!

I am just thrilled beyond words! Euphoria is so much more than an amazing song. It is a work of art. Ever since the first semi-final, I was hopelessly entranced by Euphoria and while I’m a huge fan of Danny, I had my heart set on Euphoria and Loreen’s unique interpretation of the song. Her vocals were flawless, the performance was an artistic showcase and everything was absolutely mesmerizing. On top of that, its a modern, catchy song that is completely in rhyme with the time. This will stand out a mile at the Eurovision Song Contest in May.

Sweden, you chose well. Grattis till Loreen och lycka till!

The day has finally arrived! After six weeks of semi-finals and a second chance round that saw mesmerizing performances, funny moments and shock exits, it all comes down to tonight as the ten acts prepare for the final countdown to do battle for the honor of representing Sweden at the 2012 Eurovision Song Contest.

The country is raging with speculation and divided into two camps over who ought to win. With the international juries having a say, it is predicted to be an extremely tight race and I, personally, am refusing to even think about it or else I’ll end up with heart palpitations. I’m going to get enough of that during the voting anyways. Here’s the line-up:

Apart from the strongest line-up in a good long while, SVT have a spectacular show planned. This includes the long-awaited Melodifestivalen comeback of Helena Paparizou, the Greek-Swedish diva who took Greece to their first Eurovision victory back in 2005. She’s back in Sweden and will be performing the interval act, reinterpreting last year’s winning song Popular in a completely different arrangement. According to insiders, its going to be a performance like no other. And speaking of past winners, Sweden’s golden boy and Eurovision bronze medalist Eric Saade himself will be opening the show with a medley of all his hits. Wowsers! This year’s Mello is going to rock Sweden! And you can catch it all live on SVT Play here at 20:00 CET.

And don’t forget your Swedish treats! I’ve got me my Ikea Choklad Mörk, Pepparkakor cookies (you can find my recipe here) and my Swedish flag. Here’s to an amazing show! Go Sverige!

There are even more Mello songs further down the list and it would appear that this will remain the case for the next few weeks.

Loreen’s Euphoria is currently number one with Danny’s Amazing right on its heels. Lisa Miskovsky is sitting pretty at third place with a song that is a complete contrast to the first two. Clearly the Swedes love Why Start A Fire, so could it be a potential dark horse? She’s followed by newcomer David Lindgren’s Shout It Out and Why Am I Crying by Molly Sandén. Incidentally, quite a few entries have also started charting in other countries, such as Norway, Denmark and Finland.

One thing’s for sure, its going to be an epic finalen at the Globen this year and I can’t wait!

Wow! What an exciting semi-final that was! As usual, SVT had saved the best songs for last that was a veritable battle with many casualties that had me watching behind a cushion under the sofa.

First off, I am very sad that the amazing Charlotte Perrelli did not progress further. The Girl (see what I did there?) is schlager royalty and a Eurovision winner to boot! That being said, The Girl was never a real contender, despite the catchy hook and empowering performance. I was not surprised to see it stall but it’s still disappointing. Nevertheless, The Girl is THE schlager hit of the year and Perrelli ought to get a decent-sized hit out of it.

A special mention to Hanna Linblad and her song Goosebumps. It was a very spirited Kylie Minouge Showgirl-esque performance with a nice eighties flair. Unfortunately, this too was one of the casualties of the night.

Which brings us to the songs that did qualify. After her haunting performance of Why Start A Fire, I felt that Lisa Miskovsky really ought to qualify and very well deserved it. I did not however, imagine that she would qualify ahead of Danny Saucedo! It was beautiful, authentic song and performance with a stage show that was more artsy than gimmicky. I think Lisa did a fine job of putting on a Mello performance without compromising her artistry and style outside the contest.

And then there was Danny. His song (and touted winner) Amazing was indeed so. His performance was not. Preferring to focus on the choreography and the spectacle if it (which was absolutely incredible in all it’s TRON-like glory), his vocals suffered and was not all up to par. His too biggest assets are his voice and his face and both got lost in the concept and demands of the stage show. He really needs to step it up at the Globen because personally, I don’t think his victory is a done deal. Lisa Miskovsky qualifying ahead of him proves that.

All in all, it was an epic show and SVT did a magnificent job. All that’s left is the exercise of Andra Chansen before the Finalen at the Globen. And the best part is that all the songs are out NOW on iTunes. Woohoo!

All images courtesy of SVT.

Mystery and Euphoria at Melodifestivalen!

The first semi-final of Melodifestivalen 2012 took place last Saturday and it was everything you have come to expect from Sweden: glossy, glamourous and hugely entertaining. But even I, with all my expectations, had them outshone by two performances that had me spellbound. First off, Dead By April made quite a monstrous splash on stage with their song Mystery. Introducing ‘the growl’ to Mello for the first time, it was something to behold. It was melodic and raw and I am thrilled that it qualified. You could tell that the boys weren’t expecting to, but really thrilled when they did. 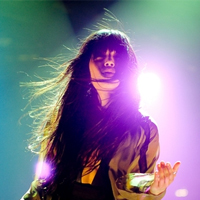 Secondly was Loreen and Euphoria. What can I say about Loreen that hasn’t already been said a million times before? Everything about the performance was EPIC. From the song, to the vocals to the presentation. I absolutely loved the solo contemporary dance that was so unique, sophisticated, artsy and different from what we would normally expect from a song of this genre. That, combined with her flawless vocal… I was speechless by the end of it. I honestly think that this could actually be a strong contender for victory, not only at Melodifestivalen, but at Eurovision as well.

However, the true mystery of the night were the ‘Andra Chansen’ qualifiers. I thought the two spots would go to Marie Serneholt’s Salt And Pepper (who looked fab in the catsuit… meow!) and Afro-Dite’s generous slice of old-skool disco The Boy Can Dance. If you watch the videos, I’m sure you’ll agree. Instead, Sean Banan’s Sean Den Förste Banan and Thorsten Flinck’s Jag Reser Mig Igen qualified. Oh, and after last year’s third place, The Moniker came last.

And it’s only the first week! I get quite giddy thinking about what we have in store next.

Melodifestivalen 2012 kicks off this weekend!

It’s hard to believe that an entire year has flown by already but goodness knows we are ready for another six weeks of glam, glitter, wind machines and fireworks.

I am of course talking about Melodifestivalen and the fact that it all kicks off this week! This is what we have been waiting for ever since Eric Saade lifted the trophy in 2011 and we are primed and ready to experience the circus all over again. With the first of four semi-finals (Deltävling 1) taking place this Saturday in Växjö, we’re in for a real treat as we have Dead By April, Marie Serneholt, Afro-Dite and Loreen competing. From the clips that were released yesterday, which you can watch here, we have some really good performances lined up.

Hold on to your hats (lest they be blown away by the wind machines), Mello is about to start!