The world comes together for Spain & ‘Quédate Conmigo’.

Music is truly the universal language of the world and this is something the Eurovision Song Contest and its fans joyously celebrate. I just came across this absolutely stunning video of singers from all corners of the world covering Spain’s 2012 entry Quédate Conmigo as a show of support for Spain and Pastora Soler. And its just… wow.

Watching this just reminds you of what a truly incredible thing music is, to be able to bring people from all around the world together in song and in one voice.

This right here is why we love the Eurovision Song Contest.

The past few weeks have all gone by in a blur with the national finals season reaching its zenith as the last of the 42 particpating countries select their entries for the 2012 Eurovision Song Contest. Here’s a quick run-down of what’s been happening in Spain, Slovakia, Lithuania and Russia:

SPAIN: In the elaborate Eurovision gala organized by RTVE for Pastora Soler, the country’s Eurovision Song Contest entry was selected and to no one’s surprise, pre-contest favorite Quédate Conmigo made a perfect score with both the jury and public. It was, in my opinion, the best song on offer, not for the song itself (which is your typical Eurovision belter ballad) but because of Pastora’s beautifully emotive delivery that started off all vulnerable and delicate before building up to that powerfully explosive key change. Pastora was absolutely flawless. And it’s been a long time since I’ve been this excited about the prospects of a Spanish entry.

SLOVAKIA: The Slovak entry was unveiled and Max Jason Mai will do the honors of flying the flag with the song Don’t Close Your Eyes. It’s light-weight rock very much in the style of Thirty Seconds To Mars. It’s got a fantastic intro and the bridge and the chorus sounds very promising. However, I feel it’s not fair to judge the song in its studio version as it had been built to be a stadium rock anthem so it will most likely come alive when performed on the big stage. That being said, it is a brave choice by the Slovaks and continues their trend of diverse, quality songs. However, Max really needs to get a haircut and stop the pouting. People keep mistaking him for a girl!

LITHUANIA: The Lithuanians selected Love Is Blind by Donny Montell to represent them at the Eurovision Song Contest. This is Donny’s fourth attempt at the Lithuanian ticket and he’s finally managed to clinch it with this rather interesting song that starts off as an adult-contemporary pop song with faux jazz before transforming into a disco stomper. And just when you think you’ve got the handle of it, the middle eight kicks in with Donny performing handstands and all manner of theatrics. You’ve got to give him points for sheer enthusiasm. He sings the song very well despite it all but I reckon he ought to loose the blindfold. I think we can figure out that ‘love is blind’ for ourselves. Overall, great song choice for Lithuania.

RUSSIA: What can I say about Russia’s entry? Buranovskiye Babushki are adorable and sweet and all, but so are kittens and you wouldn’t send them to Eurovision. Then again, there really wasn’t anything great on offer in the national final. I honestly don’t know what to make off it, or their chances at Eurovision with the song Party For Everybody. Either they do well and get a good result, or crash and burn in the semi-final. Eitherway, they are loads of fun to watch.

And tonight, we’ll have five more songs to add to the line-up for Baku! They are Portugal, Romania, Moldova, Serbia and Sweden.

As the 2012 national finals season for the Eurovision Song Contest approaches its final stages, we can see that plenty of Eurovision entries as well as national final entries enter the iTunes chart in their respective countries. Have a look below: 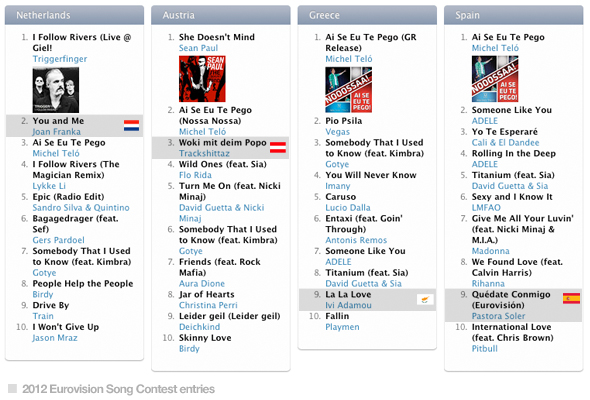 Perhaps the most surprising is the Netherlands, with the Dutch entry You And I by Joan Franka at # 2 (previously #1 last week). The last time a Dutch entry was a commercial hit on home soil was in 2010 with Sieneke’s Ik Ben Verliefd (Sha-la-lie). I suppose John de Mol deserves some credit in drumming up interest in the Eurovision Song Contest again and for making the entry a commercial hit, thus restoring some credibility to the Contest in the eyes of the Dutch public and media as well creating a bit of pride. That still doesn’t exonerate him from hijacking the Nationaal Songfestival and turning it into a ‘The Voice’ after-show.

Another welcome surprise can be seen in the Spanish iTunes chart, with the country’s newly selected Eurovision entry Quédate Conmigo in at #9. This has never happened before, at least in my recollection, to a Spanish entry. It means that the people are getting behind the song and are very proud of it. I think we can expect some really good viewing figures from Spain this year.

Unsurprisingly, we can see Cyprus’ entry La La Love in the Greek chart at #9. No surprises for guessing where Greece’s douze points are going to.

As usual, Sweden’s Melodifestivalen dominates the iTunes chart in the run up to the Finalen i Globen and we can expect this to continue over the next coming weeks as the Swedes turn their attention to Eurovison Song Contest preparations.

A few entries have fallen off the charts but will most likely appear again as the Contest looms closer. These include Norway’s Stay by Tooji and Italy’s Per Sempre by Nina Zilli, which I suspect may return re-incarnated in its Eurovision form.

I have to say, it’s really great to see countries getting behind their entries and turning them into commercial hits as well as worthy showcases of their country’s music heritage, culture and industry. Goes to prove that the Eurovision Song Contest is more commercially relevant than people are prepared to admit.

Following the trend of internal artist selections that seem to be popular this year, Spain have internally nominated Pastora Soler as their representative and RTVE have revealed the songs that she will sing for the Spanish nation to decide which will be the country’s 52nd entry to the Eurovision Song Contest. Two songs have already been selected by Pastora and her team to go forward to the national final. They are Tu Vida Es Tu Vida (“Your life is your life”) and Quédate Conmigo (“Stay with me”). Check them out below:

Then there are two more songs that the public must vote for on RTVE’s Eurovision platform, with the winner going on to join the first two songs in the televised final. These are Me Despido De Ti (“I’m saying farewell to you”) and Ahora O Nunca (“Now or never”).

Ahora O Nunca You can vote for your favourite here up until the 20th of February with one vote allowed per user. The televised final will take place on March 3rd.

Without going into too much detail (because we are planning a more in-depth review), I just want to say that these songs are superbly well-crafted, authentically Spanish and amazingly well-sung. I’m really excited because the Spanish bid is going to be a class act all the way to Baku.